I got challenged to do some research on John Coleman. Very well. Challenge accepted.

Coleman started his career in 1953 at WCIA in Champaign, Illinois, doing the early evening weather forecast and a local bandstand show called At The Hop while he was a student at University of Illinois. After receiving his journalism degree in 1957, he became the weather anchor for WCIA’s sister station WMBD-TV in Peoria, Illinois. Coleman was also a weather anchor for KETV in Omaha, WISN-TV in Milwaukee and then WBBM-TV and WLS-TV in Chicago. 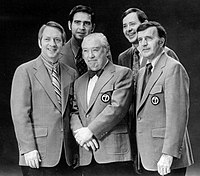 Coleman became the original weathercaster on what was then the brand-new ABC network morning program, Good Morning America. He stayed seven years with this top-rated program anchored by David Hartman and Joan Lunden.

In 1981, he persuaded communications entrepreneur Frank Batten to help establish The Weather Channel, serving as TWC’s CEO and President during the start-up and its first year of operation. After being forced out of TWC,[5] Coleman became weather anchor at WCBS-TV in New York and then at WMAQ-TV in Chicago, before moving to Southern California to join the independent television station, KUSI-TV in San Diego, in what Coleman fondly calls “his retirement job.”[1] Coleman abruptly left KUSI while on vacation in April 2014, with no on-air farewell.

On CNN, Coleman claimed to be a scientist. He’s been a TV weatherman for over 60 years, but his degree is in journalism.

“The government puts out about $2.5m directly for climate research every year. It only gives that money to scientists who will produce scientific results that support the global warming hypothesis of the Democratic Party, or the position. So, they don’t have any choice. If you’re gonna get the money, you’ve gotta support their position. Therefore, 97% of the scientific reports publish support global warming.”

Which is just complete and utter non-sense. Grants are awarded before research is performed and before its conclusions are known. The 3% of contrarian climate scientists like Roy Spencer and Richard Lindzen have received millions of dollars in government research grants.

Analog at Birth, Digital by Design View all posts by thetechguychris

All of my Posts